This is a very basic  color Primer for rabbits

Basic rabbit Colors are created from the following

Genes  have locus's, which can have alleles  as modifiers .  The two pigments  that  combine to make colors in rabbits are Black/Brown (eumelanin) & Yellow (red - pheomelanin)

Agouti  locus's - expresses  the "wild color" which is the banding of the individual hairs. Banding is dominate , and is expressed by " A" allele.   "Self " colored,  which has no banding is the recessive allele "a" . If the animal has two recessive alleles it will have a solid colored hair shaft . ther is a third loci on this gene. at: the tan marker. Tan creates a soild pattern onb the top of the rabbit with white or tan belly , inner ears , and eye rings. similar to harliquen, it is exspressing the soild color of the eumelanin on top , and the Soild color of the pheomelanin on the bottom. 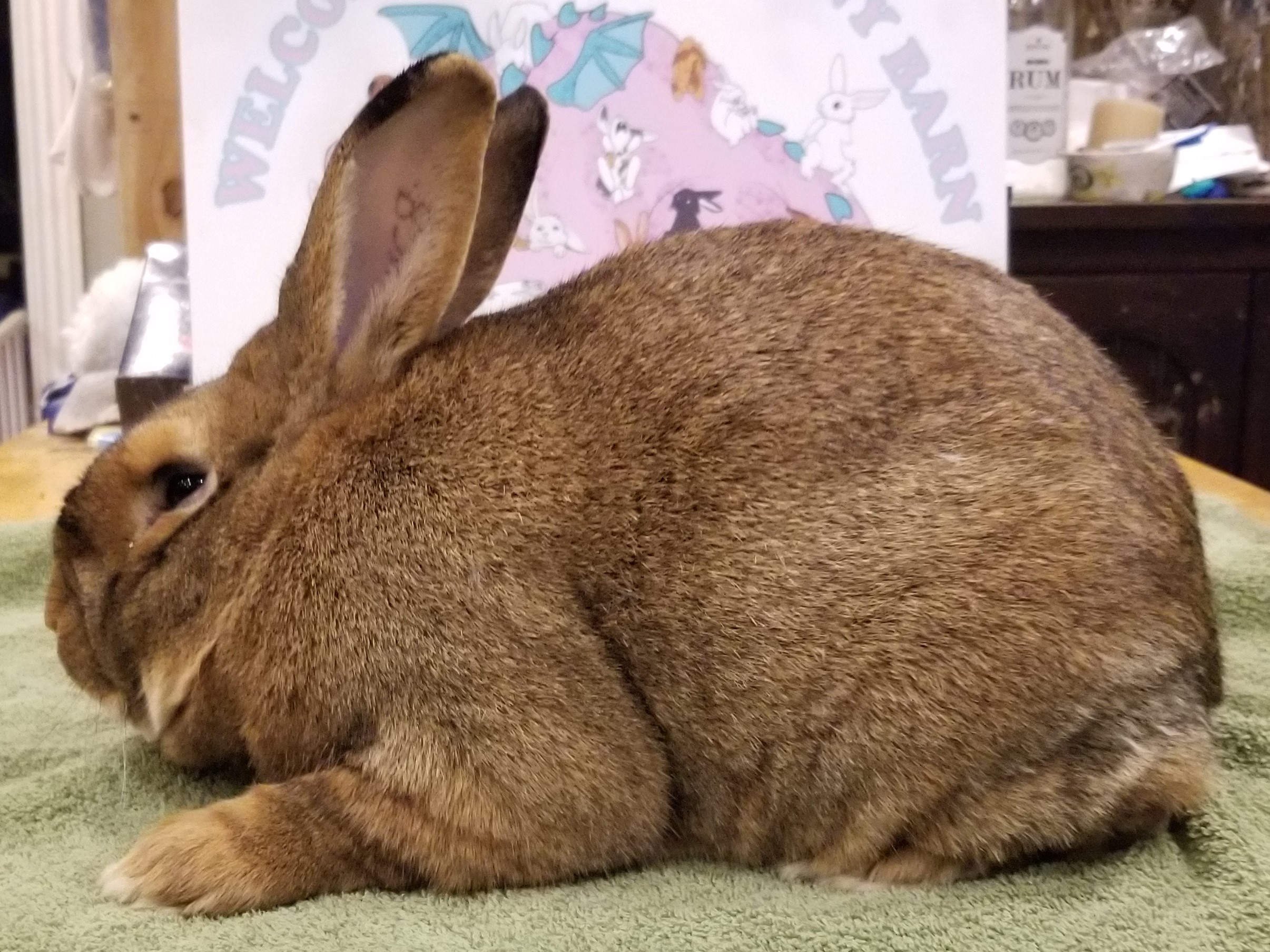 Waldorf is a wild colored Chestnut He has Dominate alleles  across his phenotype. 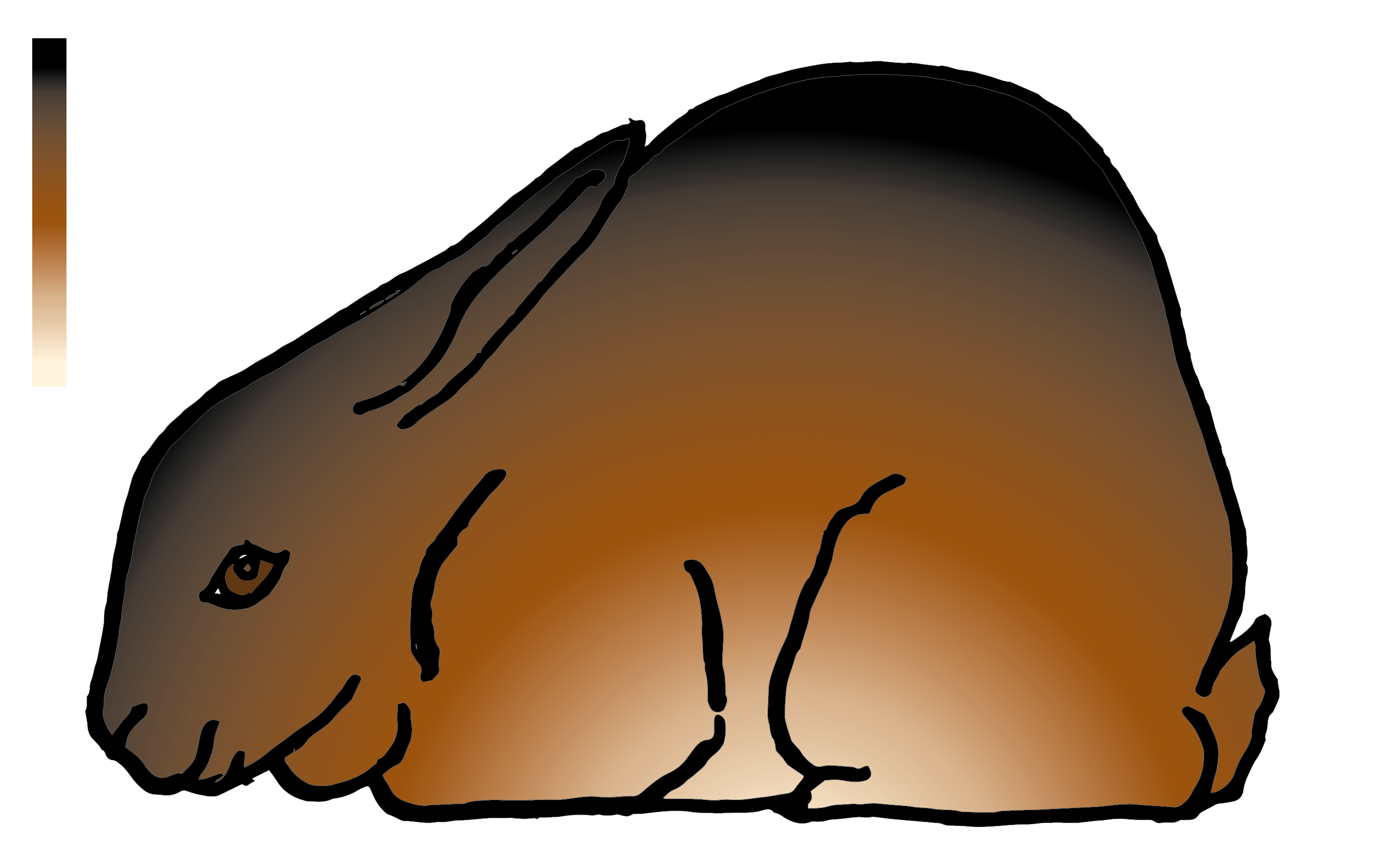 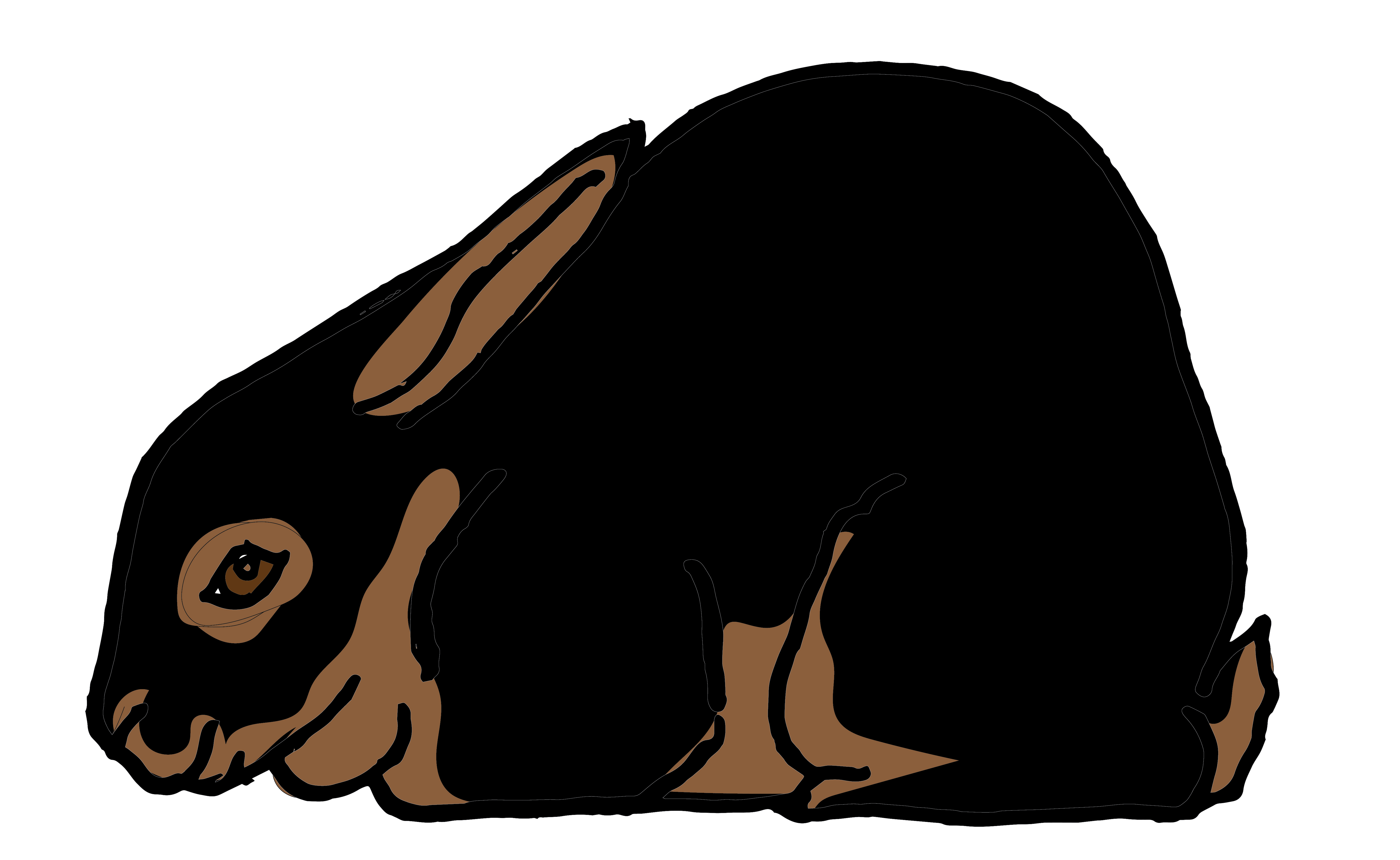 at- Produces Tan's, Otters , and Martains
. 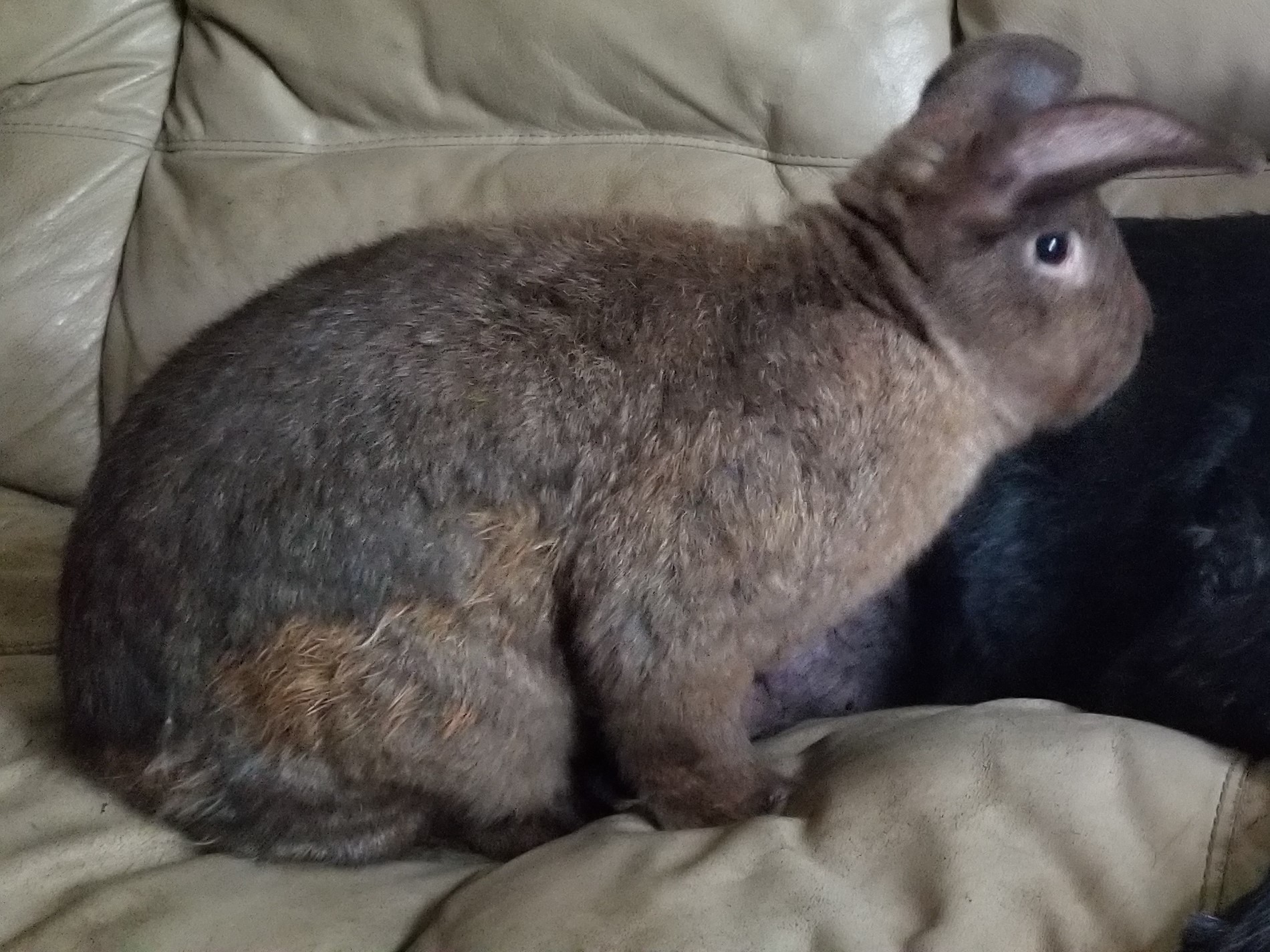 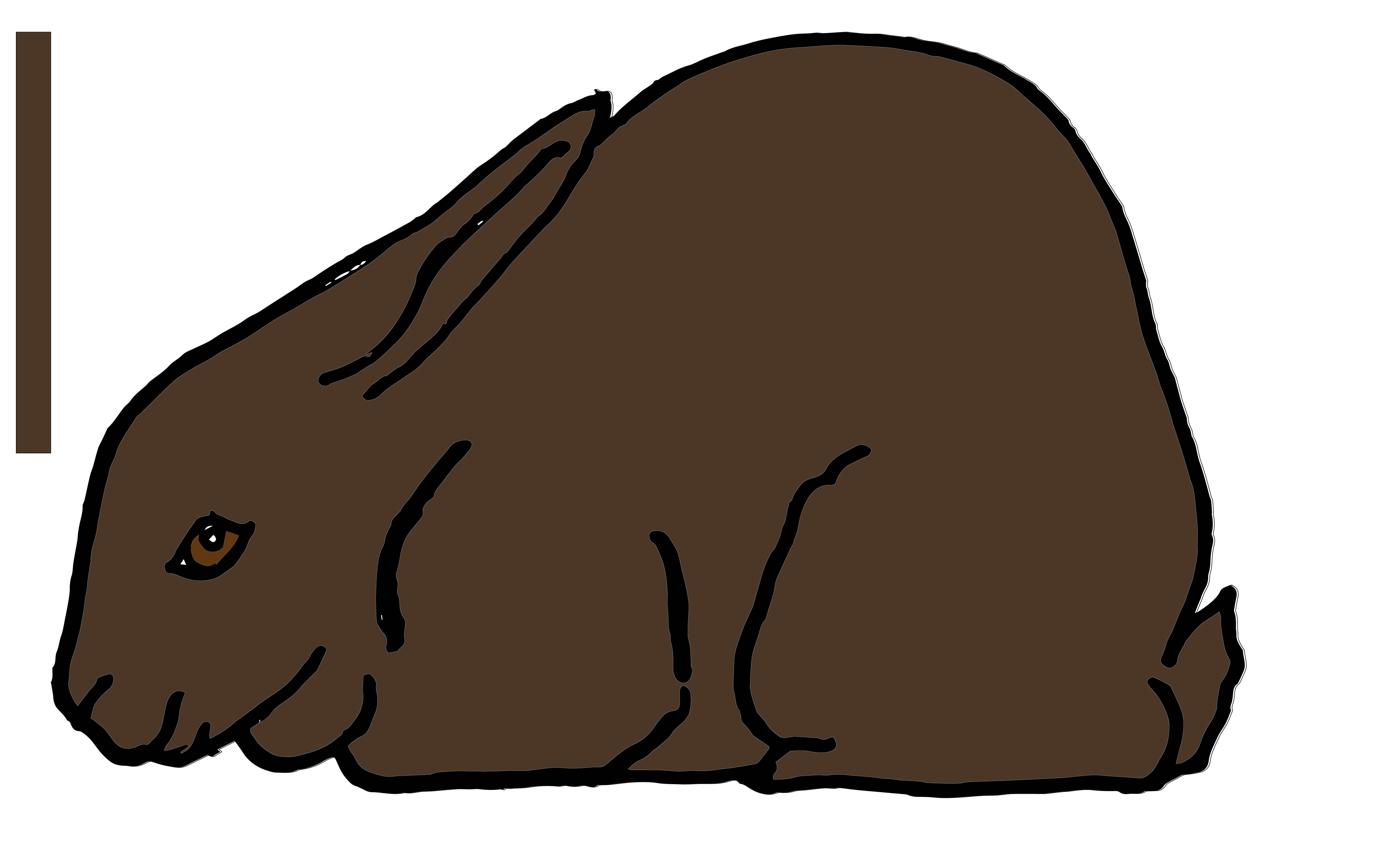 Black is the Dominate color in Rabbits , Chocolate is the recessive.

The B loci expresses the quality of  eumelanin.  Eumelanin can be exspressed as either Black or Brown, and their are many colors that are created depending on which of these is the base color. Their are also genes that mask or remove the ability for a hair folical to produce eumelanin, in these cases either no pigment(white) or onl  pheomelanin(Yellow/Red) are exspressed.

T-Payne is a Black Self .
His Hairs are solid black
from Base to tip. 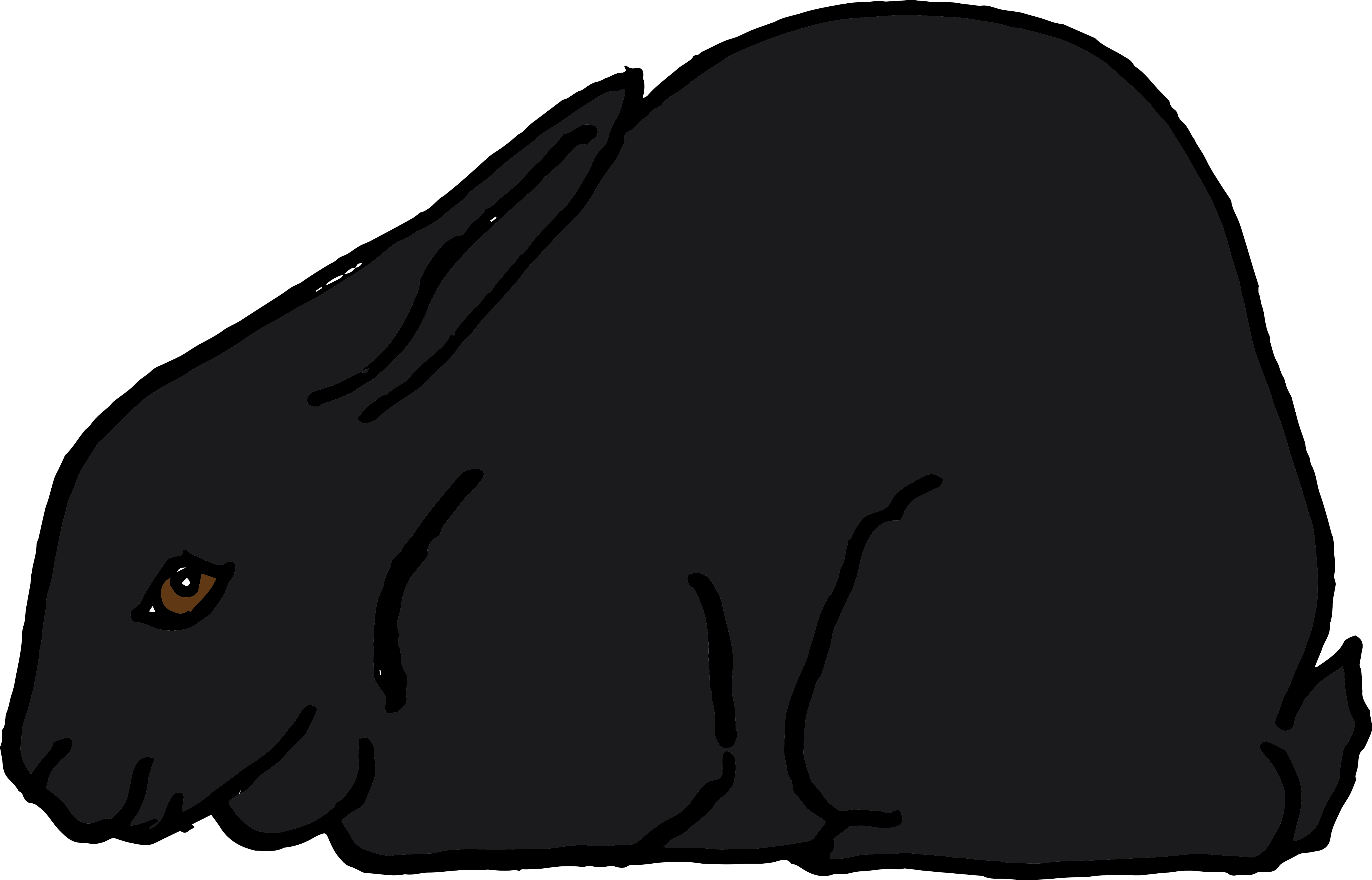 Moe Lay is molting in this picture. the lighter colored hairs are dead hairs in process of shedding, his Chocolate body color has no banding on the hairs and he is a self colored rabbit

"cchd" or "chd" which is Dark Chinchilla, this strips most of the pheomelanin (red/yellow) and it turns grey/white  while leaving the eumelanin (black/chocolate) alone.

"cchl"or " chl"  Light Chinchilla , strips the pheomelanin (red/yellow) and some of  the eumelanin (black/chocolate) giving it a shaded appearance. It can also give the eumelanin a lightning effect turning it a sepia color.

"ch"  Himalayan (or Californian) allele , is a temperature sensitive allele that  leaves colors at only pointed tips . The  parts of the rabbit espoused to the coldest temperatures have the richest darkest colors and the  color intensity can change seasonally.

"c" is the most recessive . Two copies of "c" on this allele produce Red Eye Whites. Although "c" this is the most recessive gene, in    some ways has the most dominate effect. When "cc" is expressed it prevents both pheomelanin and eumelanin from being exspressed, and this then  masks all other Loci  hiding the rabbits actual coat colors completely.

This loci has two Allele  D-  & dd .   The D Loci, effects the Eumelanin of a rabbit on the B locus. A rabbit that has double recessive genes for dilution "dd", will make a Black Rabbit   Blue,  and a Chocolate Rabbit a Tan/Fawn color called " lilac" in rabbits.

D is dominate for no dilution or full Density of color,

d is recessive and Diluties the color .

This Alle modifies the bands on an Argouti Rabbit .

Ed  dominate black. This is the most Dominate Gene on the E loci, it is more Dominate then Es.

This gene exspresses Full soild color at the B loci Eumelinin . It completly extendes the black bands on the Argouti hair shaft  with wha ever color is present in B. Some Genetisists  have theorized that a Double Steel coat can also present as Dominate black, but since the Ed marker has been reported as far back as the 1800's I am incuding it. I also wonder if my Broken black Buck may actually carry this gene along with E.

Es Steel ,  A Steel Coat  the hait shaft is mostly black with a gold or White/silver Tip, tip color is depended on where the Rabbit can produce pheomelanin or not.  A Gold Tipped Steel is a nomal presenting pheomelanin, a Silver tipped Steele is most likly a Chinchilla Rabbit at C.  Double Steel will extend the pigment of the shafts  on some rabbits to make a Agouti look like a self black.

E is  the thrids most dominate gene , It exspresses     Regular Extenstion, or  normal expression of  the colors at the A and B loci

ej  Harlequin  characterized by  alternating patches of banding. These rabbits look Bringdled or patched, in te harliquen Breed, the Color is perfered to have a Perfectly Split face between the pheomelanin and eumelinin sides, with the opposite ear colored, and again the oposite front legs, Ideally the rabbit will have a clean checker board like pattern .  Very Clean Harliquens with havea densly colored coat with clean patches but in co-domiante rabbits brindling and mudding of the patches is common.  ej exspresses itseld in 2 base colors.

e  Tort/ non-extension the oposite of the Steels with the light part of the Agouti hairs extended to the base. Non-extention strips out the eumelinin from the  argouti coat and presents as a yellow/red soild colored rabbit, but it is common for these rabbits to still show the creamy/white underbelly   that distinguises the Argouti.

A Tort is a Self colored rabbit at A, " aa" and it exspressed as a Reddish soild coat since the pheomelanin masks the Color at A, but they tend to exspress the eumelinin  with darker points. silimar to the Hymilation points, their Nose, Ears, Feet and Tail will be shaded darker.