From Bun Club Wiki
Jump to navigationJump to search 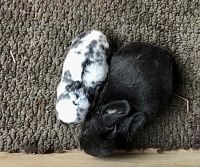 Pictured is a two week old peanut next to it’s sibling. This particular peanut lived longer than any other I have had but ultimately passed away about a week after this picture was taken.

The dwarf gene is responsible for the small size of many of the world’s favorite breeds.

The gene can be found in the following breeds: Holland Lop, Netherland Dwarf, Mini Rex, Britannia Petite, Dwarf Hotot, American Fuzzy Lop, and Jersey Wooly. The dwarf gene is dominant meaning if they have the gene it will be expressed, or shown on the rabbit. It cannot be carried by a non dwarf rabbit.

A true dwarf rabbit is one in which has one copy of the dwarfing gene and one copy of the non dwarfing gene. These are the rabbits in which adhere most closely to their breed standards size. They are the rabbits you see most commonly winning on the show tables. Although they show better than false dwarfs, being a true dwarf means they can produce peanuts since they carry a copy of the dwarfing gene. A false dwarf is a rabbit that is of a breed that has the dwarf gene but that particular rabbit does not carry a copy. These rabbits tend to not only be oversized in comparison to the weight ranges of their breed standard but they also typically have elongated features. False dwarfs usually are longer in body, ears over maximum length, longer in bone, as well as in their muzzles/heads. Although they cannot typically show past junior age due to their large size as seniors, they do serve a purpose in a breeding program. If nice enough quality, a false dwarf can be a huge asset as they cannot pass on the dwarf gene therefore you will never get peanuts out of a false dwarf even if they are bred to a true dwarf, a downside to that is you are very likely to keep producing false dwarfs.

Peanuts are rabbits in which have two copies of the dwarf gene. Having two copies makes these rabbits extremely small and underdeveloped. It is lethal as it causes them to have underdeveloped organs and digestive system so when on their mother drinking milk they don’t gain weight or grow. Very rarely will a peanut make it to be a few weeks old, they usually pass within the first few days as their bodies are just too weak. They are an unfortunate but necessary part of having some of our favorite breeds.